No crop, no work; migration only option for tribal people of Eastern Madhya Pradesh

Rewa/Satna: Anita Kol, 32, has a dreadfully vacant look on her face. As her neighbours narrate the incident, tears slowly start to trickle down her face.

She lost her husband Raj Narayan, the only breadwinner in the family few weeks ago.

But the more tragic part is that she would never know how he actually died.

Raj Narayan, 35, a marginal farmer of Tilou (Dhuman Panchayat) in Java block of Rewa, had migrated to Maharashtra in February with fellow villagers to work for the first time.

A few weeks later, these fellow villagers informed that Raj Narayan’s body was found hanging in the factory that he worked in (no one in Tilou knows what factory and owned by whom). All Anita’s questions remained unanswered.

“He never wanted to go out to work, but the crop failed twice in row and we had no option,” Anita says. The critical situation of the family could be underlined by the fact that despite the tragedy Anita had to send out her 16-year-old son to Gujarat to eke a livelihood for the family.

Several kilometers away, in Badatalab (Kilhoura) village of Majhgawan in Satna, Geeta Mawasi somehow manages to take care of her malnourished and ailing son Vikas, 4, and another smaller kid. Her husband Umesh is also a first time migrant to Ahmedabad in search of work.

The day we met Geeta and her extended family, they were particularly upset because they were told that the migrants from the village were missing from their spot of work in Gujarat. Thankfully, the issue got resolved in sometime as some people managed to contact the contractor.

[This is second part of our special series on drought situation in Madhya Pradesh. The first report, 'Life on edge: drought in Baghelkhand hits women, children like never before', can be read here]

With unprecedented drought hitting the Baghelkhand region – crops have failed since two years and water levels have dipped alarmingly – mass migration is continuing in the area, especially in the poverty stricken tribal belts.

We visited more than a dozen villages of both the districts and in each at least 25-30 persons had migrated. In some villages, most of the able bodied males were not present. Some had taken even their families, while others had left women, children and elderly behind, to bear the brunt of the grave situation.

In Tagarpar also of Kilhoura panchayat, Bhuri Bai, a 70-year-old claimed that she had not seen such drought conditions since the time ‘badmash ko jungle mei mare they’ (anti-socials were killed in jungles). Villagers say she refers to the 1979 encounter of some dacoits.

By rough estimates of NGO Adiwasi Adhikar Manch, Satna, at least 2000 youth migrated from the Tarai area of Majhgawan block alone. For example, in Badatalab, 33 persons are on record to have migrated while two dozen each have migrated from Khairwar Majhgawan and Tagarpar. In Java block of Rewa, the situation is similar, if not worse. 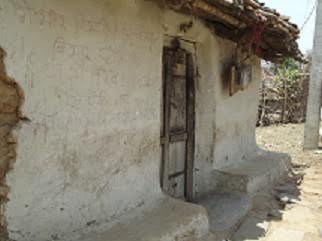 Mahatma Gandhi National Rural Employment Guarantee Scheme (MNREGS) is hardly useful as either works have not come in months, or payments were not done on time, forcing people to look for other options.

Satna district collector Naresh Pal refutes large scale migration saying that MNREGS is attractive to people because of presence of big Cement factories in the district that pay far better.

But on the ground it is evident that people have not gone to these cement factories to look for work but to Gujarat, Maharashtra, Karnataka and Uttar Pradesh.

Despondent family members left behind or locked doors of dilapidated hutments bear testimony to the severe conditions that the region is facing.