Pohri (Shivpuri), MP: I very well knew I would find something deeply distressing when I approached the dingy, soggy hutment of Banwari Saharia in the remote tribal village.

But yet found myself unprepared for the shock when the skeletal man lifted a grimy shawl from a bamboo basket kept on an old charpoy.

A shriveled tiny body with a dense mop of hair was curled in a fetal position in the basket.

With the unexpected movement a feeble cry emanated from it, clearly a big effort from the extremely malnourished 20-day-old girl. A kid tried to put a bottle of milk to the shrunken mouth, but the tiny body did not have even part of the strength required to suck the milk.

To our (me and my local associate social activist Ajay Yadav) experienced eyes, it was a quick assessment that the girl was in terminal condition and in need of immediate critical medical care.

“You need to take her to the hospital immediately,” I told Banwari, grandfather of the little girl and a primitive tribal living in Jakhnaud village of Pohri block in Shivpuri district.

He looked at me with desolate eyes for quite some time before hanging his head. Having heard about the case before visiting the place, I knew what Banwari’s dejected gesture meant.

The mother of the girl, 19-year-old Jasoda, had succumbed eight days after delivering the baby at home one rainy night (on August 17).

Jasoda’s husband and the unnamed girl’s (she was not named as the family probably did not expect her to survive) father Sujan Singh, 22, is still away at Jaipur in neighbouring Rajasthan where he works as a manual labourer.

Banwari himself is a tuberculosis patient with limited capacity of movement and four minor children of himself. His wife Rajkumari, the only ‘able-bodied’ in the family had gone out to earn a living. 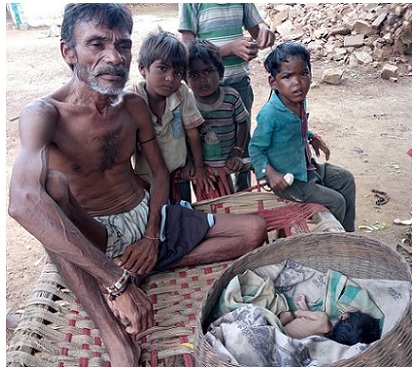 So, who would accompany the newborn baby to the hospital in Shivpuri district headquarters – 50kms away?

“We have been trying to convince them to take the baby to hospital. But they refuse citing their problems,” Bhagwati Yadav, the local Anganwadi worker said.

“We had tried very hard to get them to take Jasoda to hospital for childbirth, but the labour pain occurred late at night and they did not even inform me,” ASHA (local health worker) Shanti Kushwah said.

I looked back at Banwari. “What could we do? We did not have the money to spend in the hospital. Three of my six children were born in hospital and I know it would take be at least Rs 1500 there. Jasoda was doing fine after childbirth though the baby was weak, but she suddenly passed away after getting some fits,” the man said in an explanatory tone.

Ajay Yadav, who has been working in the area on health, nutrition and food security issues, got into a series question answers with Banwari in local dialect. He told me that after childbirth around midnight, the placenta was severed many hours later and the mother and child were left in the soggy hutment without much care as the mother-in-law was out most of time. “She (Jasoda) probably got infection and succumbed as there was no medical care,” Ajay deduced.

Like Jasoda, most of the women in the village deliver their babies at home in Jakhnaud and many surrounding villages despite claims of over 90% institutional delivery in the state. But our attention was now rapt on the feeble body in the basket that was heaving from the effort of crying. We had to something.

Having failed to convince the family to take the baby to hospital, we took up the matter with block medical officer (BMO) of Pohri Dr Chandrashekhar Gupta when we met him later in the day. Ajay and Dr Gupta got into active mode and found out that if the Child Line could take the responsibility, the baby could be admitted to Shivpuri Sick Newborn Child Unit (SNCU) for treatment. The BMO would arrange for the ambulance.

Ajay took the responsibility of going back to Jakhnaud to convince the family and get the child to SNCU. I was relieved few hours later, when Ajay called to tell me that the baby had been admitted to Shivpuri SNCU with help of local Child Line authorities. I slept a little relieved, though worried that night. But the morning did not bring good news. The little girl had succumbed.

The intervention had come too late for that ill-fated soul. Though she was born in a developing country and state where crores are spend on government sector health care and infrastructure, she could not breach the barriers of life situations and government systems that might allow her to survive beyond three weeks.